Face screws, Edge screws, and Hidden Deck Clips: Learn the differences between these fasteners to decide what to use for your deck build.

When you’re building a deck, you likely know what kind of board you want to use. But have you put much thought into how you’ll fasten it? Sure, using any old screw could do the job, but it also might mean you’ll spend more time replacing boards down the road than enjoying the deck. Learn more about three types of fasteners— face screws, Edge screws, and hidden deck clips —so you can make the right choice for your project. 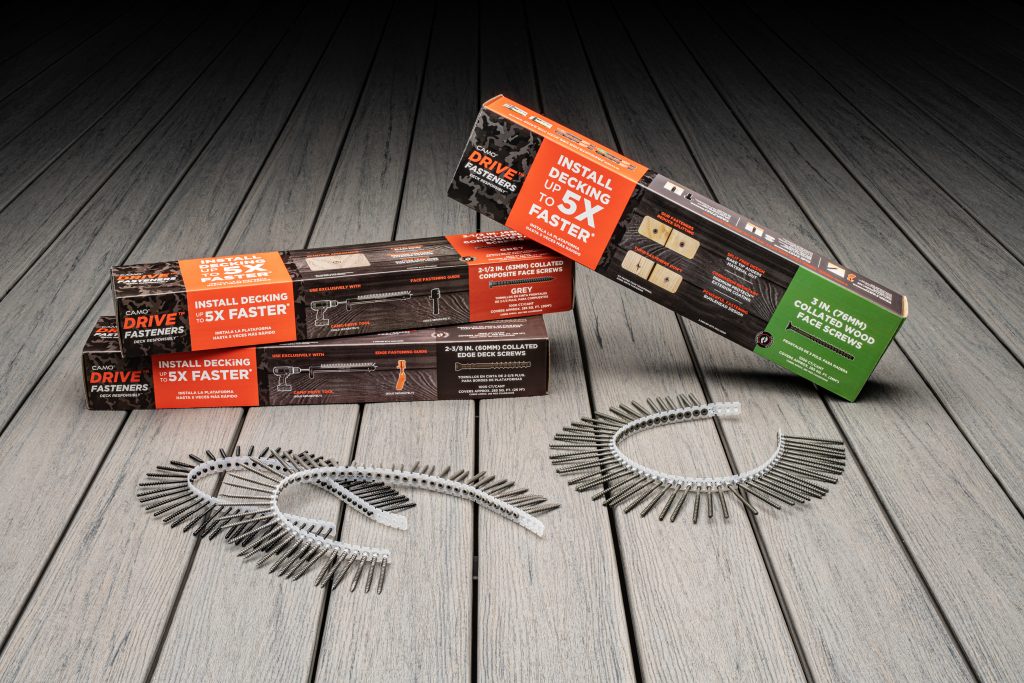 Tried and true, face screws are a traditional fastener for square deck boards. For wood boards like pressure treated, cedar, and redwood, you can use a buglehead deck screw, which is designed to keep the board down but is also very visible on the deck top.

For square composite or PVC decking, there are color-matched composite screws that blend into the deck surface. These screws typically feature a double slash point to auger board material for fast driving and a shank designed to reduce mushrooming, giving you a clean finish.

While face screws are cost-effective, they can cause splitting and cracking, which ages your deck prematurely. Consider using a face screw engineered to reduce these risks, like CAMO® Collated Face Screws for pressure treated wood and composite. A bonus for these collated screws? You can install them quickly and comfortably while standing with the CAMO DRIVE™ tool.

Finally, using the correct coating or alloy for your project is essential. For example, a carbon-coated face screw will be fine for pressure treated, PVC, and composite decks in temperate climates, but use corrosion-resistant 316 Stainless Steel screws for cedar, redwood, hardwood, and installations near water. 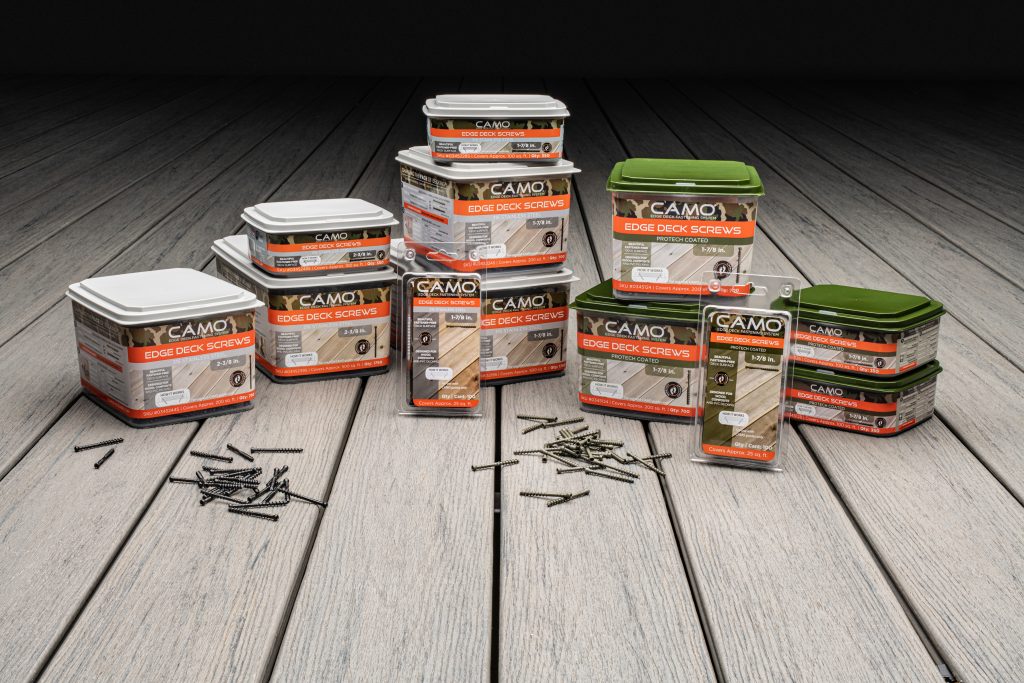 If you want to maximize the longevity of your square deck boards and keep the surface clean from fasteners, use CAMO Edge screws. These screws, as their name suggests fasten the board through the edge, making a strong v-lock connection into the joist. Additionally, they feature a patented rake tip that augers board material, so you don’t need to pre-drill holes on pressure treated wood, cedar, redwood, and uncapped composite decking before fastening. They are available in CAMO’s proprietary PROTECH™ coating and 316 Stainless Steel so that you can use them on any deck building project. 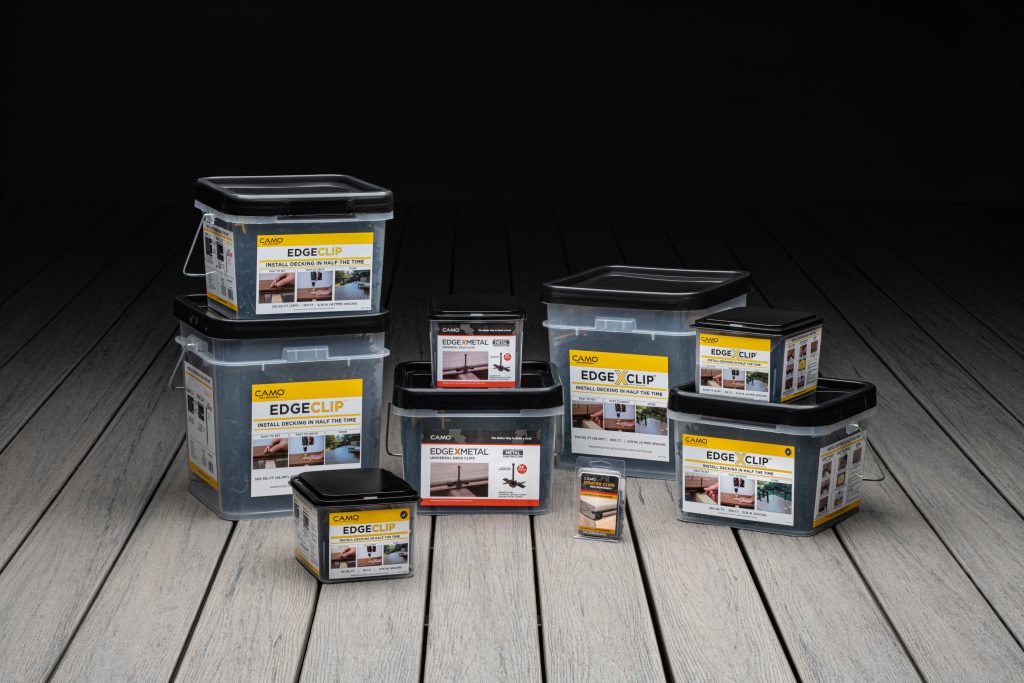 Use hidden deck clips for any grooved deck board installation. Similar to face screws, there are many options, but CAMO Universal Deck Clips top the list. Why? Unlike many clips where you have to partially install them, place the next board, then drive the clips the rest of the way, CAMO EDGE® Clips (90° deck patterns), EDGEX® Clips (any deck pattern), and EDGEXMETAL® Clips (steel framing) are one-pass fasteners. That means you put them on the joist or in the board’s groove, and they stay in place so you can set multiple rows of boards before fastening, which is a significant time-saver.

Additionally, CAMO Universal Deck Clips are up to 88% stronger than competitors’ clips in reducing lateral movement and up to 50% stronger in uplift holding power, thanks to the stainless steel gusset that locks the boards down. They are also easy to fasten with the NEVER-MISS™ Guide that comes in every pail and directs the driver bit onto the screw head, or while standing up with the ClipDRIVE™ or DRIVE tools that can make your job up to 5X faster as you can quickly move from joist to joist.

To build the best deck possible, don’t just use any screw to secure your decking. Instead, think about the finished result, then pick up the right CAMO fastening system to make your work smarter, faster, easier, and better.

We use cookies on our website to give you the most relevant experience by remembering your preferences and repeat visits. By clicking “Accept”, you consent to the use of ALL the cookies.
Do not sell my personal information.
Cookie SettingsAccept
Manage consent

This website uses cookies to improve your experience while you navigate through the website. Out of these, the cookies that are categorized as necessary are stored on your browser as they are essential for the working of basic functionalities of the website. We also use third-party cookies that help us analyze and understand how you use this website. These cookies will be stored in your browser only with your consent. You also have the option to opt-out of these cookies. But opting out of some of these cookies may affect your browsing experience.
Necessary Always Enabled
Necessary cookies are absolutely essential for the website to function properly. These cookies ensure basic functionalities and security features of the website, anonymously.
Functional
Functional cookies help to perform certain functionalities like sharing the content of the website on social media platforms, collect feedbacks, and other third-party features.
Performance
Performance cookies are used to understand and analyze the key performance indexes of the website which helps in delivering a better user experience for the visitors.
Analytics
Analytical cookies are used to understand how visitors interact with the website. These cookies help provide information on metrics the number of visitors, bounce rate, traffic source, etc.
Advertisement
Advertisement cookies are used to provide visitors with relevant ads and marketing campaigns. These cookies track visitors across websites and collect information to provide customized ads.
Others
Other uncategorized cookies are those that are being analyzed and have not been classified into a category as yet.
SAVE & ACCEPT